Canaan Fire Company Inc.
Home2022 CFC Officers2022 Parade & FireworksAbout UsApparatusCanaan Junior CorpContact UsDonate to Canaan Fire Co.ERGEvents CalendarFilesFire GlossaryFire NewsGuestbookJournalKids CornerKnox BoxLinksMembersNewsPicturesThe FallenVeteransVideo
News headlines
2022 CFC Parade and Raffle
The Canaan Fire Company will be holding its annual parade on JULY 16, 2022 at 6PM. The parade will be held in conjunction with the Canaan Railroad Days festivities which includes a CARNIVAL on LAWRENC...
➜
Canaan Fire Co Elections for 2022
On December 2, 2021 the Canaan Fire Co. held its annual elections. We are excited to see what these fine volunteers bring to the department in 2022. Please see the 2022 officer page for the results.
Past Chief Rick Weaver honored for 50 years of service

An alert passer-by, a Good Samaritan and quick work by the Canaan Fire Company saved a house at 367 Norfolk Road, Route 44, in East Canaan from major damage Saturday.

Deputy Fire Marshal Michael Fitting said a woman who had just made a purchase at Olde Farms Furniture, two doors down from the house owned by Nathaniel Cecchinato, saw flames and rushed back to the store to raise the alarm.

A man, who was not identified, called 911 and then ran to the scene. Seeing a dog inside the house, he tried to open the door, and when he couldn’t he went to the basement hatchway and was able to enter and remove the animal. He then found jugs filled with water and climbed a ladder to throw water on the flames.

Fitting said the cause was a void in a wood stove chimney. Baldwin said there was a fair amount of damage to the outside of the house but not much on the inside. Some of the outside need­ed boarding up, and there was minor interior water damage, but the occupants were able to remain in the home.

The actual fire was knocked down in about 20 minutes, and the scene was cleared about 3:30 p.m.

There was a full response from the Norfolk Fire Department, all volunteers. The Lakeville Hose Company sent its rapid intervention team. Tankers from Sheffield and New Marlboro, Mass., also were called in.

×
1 of 1
19 entries in the News
2022 CFC Parade and Raffle
The Canaan Fire Company will be holding its annual parade on JULY 16, 2022 at 6PM. The parade will be held in conjunction with the Canaan Railroad Days festivities which includes a CARNIVAL on LAWRENCE FIELD, VENDOR FAIR and excellent FIREWORKS show!! The parade will step off on Saturday, JULY 16th ...
➜
Canaan Fire Co Elections for 2022
On December 2, 2021 the Canaan Fire Co. held its annual elections. We are excited to see what these fine volunteers bring to the department in 2022. Please see the 2022 officer page for the results.
Past Chief Rick Weaver honored for 50 years of service

The Canaan fire company hosted a multi town drill Sunday morning for 4 hours in cooperation with Geer Corporation. This was the conclusion of a culmination of multi training events on campus for during the last month.
➜
Canaan Fire Car show Sept 27

Car show this Friday night September 27th. Proceeds to benefit the Canaan Fire Company. It will be on Railroad Street in North Canaan from 6 - 9pm. $10 entry fee for cars all years welcomed.There will be trophies, food & live music by Two Guys in Suits & ties.Sponsor's are Old School Del...
➜
Canaan fire receives proclamation from Governor for firefighter appreciation day 2013
On Friday, September 6th, the State of Connecticut will be recognizing the annual Firefighter’s Day, an annual event started in 1998 by Howard Gomme of Plymouth in order to recognize and thank Connecticut’s firefighters.
➜
Car Extrication Training

Here are some Canaan Fire Firefighters sharpening up there skills with a simulated automobile accident. The members had over come some different challenges and working together to resolve the situation and perform simulated extrication of hose dummies in the vehicles.
➜
Structure Fire on Norfolk Rd
Sundays rep-am CANAAN Passer-by, Good Samaritan save burning house, rescue pet An alert passer-by, a Good Samaritan and quick work by the Canaan Fire Company saved a house at 367 Norfolk Road, Route 44, in East Canaan from major damage Saturday.
➜
Train Derailment

The Housatonic train had a derailment in North Canaan. It happen at night and took all of the following day to remove the cars from the track. In all 4 cars came off the tracks including one 30,000 gallon car filled with DOT 1219.
➜
Annual Canaan Holiday Parade

The annual Canaan Holiday parade was on Sunday Nov 27. The attendance of floats and lighted moblie objects was amazing. The night was warm and there were hundreds of spectators lining the streets of Canaan.
➜
Canaan Muster

On Sunday May 15 Canaan Fire Company hosted and old fashion muster as part of 100 Anniversary celebration. We had 7 teams compete in 6 events through out the day. All members from all departments had a great time and are request we host this event again next year.
➜
100 year celebration open house and E16 dedication

On Saturday May 14 the Canaan Fire Company opened up their firehouse to all citizens to come visit the station as part of our celebration of our 100 years of service. We were joined by many people to see all the equipment and meet the members of the department.
➜
Cold Water Rescue Class

Lakeville Hose Company sponsored a cold water rescue class taught by instructors from Burrville Fire School. There was a class room night and then on Sunday morning there was the exciting in the water part of the class.
➜
Engine 16 Training

The Gowans & Knight company did it's first training with members of the department to learn all the features and benifits of the new truck. We took the truck to Laurelbrook Farm and draft from the Blackberry river.
➜
Air-Pac Drill

On Tuesday night we had an Air Pac drill at the firehouse. All Air Pac member participated in a exercise of practicing going through a window to get out a down firefighter. This is a operation we practice but hope to never have to preform this exercise.
➜
Fire Prevention Day

The fire company made it's annual trip to North Canaan Elementary School for fire prevention. The department came out strong with lots of members participating in the event to show off all our equipment and teach fire safety.
➜
Tanker Drill

On Sunday Morning Canaan Fire Co. participated in a tanker drilll in Falls Village. Tankers were called in from Norfolk, Lakeville,Sharon, and CornwallFalls Village Engine 9 was drafting from the portable ponds and suppling Canaan L-1
➜
1 of 1
19 entries in the News
2022 CFC Golf Tournament

Golf Tournament will be Monday, September 12, 2022 at Fairview Farms in Harwinton, CT.

EXCITING HOLE IN ONE PRIZES TO BE ANNOUNCED AS THEY ARE CONFIRMED!

The Canaan Fire Company will be holding its annual parade on JULY 16, 2022 at 6PM.

The parade will be held in conjunction with the Canaan Railroad Days festivities which includes CARNIVAL on LAWRENCE FIELD, vendor fair and excellent fireworks show!!

The parade will step off on Saturday, JULY 16th at 6PM, sharp. Line-up will begin at 5:15 PM, and we hope that your company will participate in this years fun!

After this past year we are all looking to have some fun ! Be creative with your unit, bring a truck if you only have a few guys, go all out if you want to march, pick a theme if you want to be fun….
We are trying to put on a family friendly fun event that will foster community and the spirit of the old town celebration and we would love for you to be part of this event.

Refreshments will be served to all marchers following the parade.

We hope to see you there!

Winner need not be present. 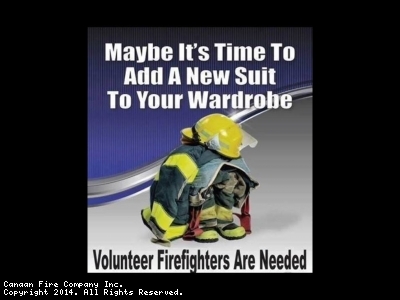 The Canaan Fire Company is looking for new members.  The Fire Department is looking for firetruck drivers - pump operators, exterior and interior firefighters. The fire department will pay for training and gear. It is very rewarding to give back to the community and be with a wonderful group of very dedicated volunteers.

Please stop in at the firehouse any Tuesday night and meet other members and see what it is all about! 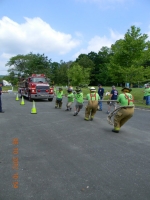 This site has been viewed 199,369 times.
News
Events
Pictures
Apparatus
Maintained by the members and staff of Canaan Fire Company Inc.. Designated trademarks and brands are the property of their respective owners. Copyright © 2006-2022. YourFirstDue Inc. All Rights Reserved. Content on this web site is supplied by Canaan Fire Company Inc.. YourFirstDue Inc. cannot be held responsible or liable for any content, text, pictures, or any other media found on this web site.
Management login
Powered by